Round up of the Birmingham Commonwealth Games 2022

This year's Commonwealth Games saw five incredible days of weightlifting and para powerlifting throughout July and August. There was lots of excitement and anticipation ahead of the Games and Weightlifting Wales would like to first congratulate all Welsh athletes for their hard work in securing their place and representing their country at the Commonwealth Games.

Day one saw Hannah Powell step onto the platform at her second Games. Hannah secured a 67kg snatch and dug deep on her final Clean & Jerk securing 85kg. This gave her a total of 152kg in the 49kg category, finishing in seventh place.

Catrin Haf Jones was up next in the 55kg category, also at her second Commonwealth Games. Unfortunately, it wasn’t Catrin’s day, missing all three snatch attempts at 83kg. Weightlifting Wales are proud of how far Catrin has come in securing her place at the Games and what Catrin has achieved. Wales looks forward to seeing you back on the platform soon.

Mikey Farmer made his Commonwealth Games debut on day two, competing in the 73kg category. Mikey secured 128kg snatch, and 158kg Clean and Jerk after going dizzy in his first two attempts, Mikey made the lift on his third and final attempt. Mikey placed seventh at his first Games.

Day three saw Christie Marie Williams compete at her third Commonwealth Games in the 64kg category. She hit an 83kg snatch on her second lift and narrowly missed out on 85kg. Christie then missed her first two attempts in the Clean & Jerk but came out to the cheer of the crowds and gave her all to hit her third and final attempt at 100kg. This gave her a total of 183kg, placing her in seventh.

Faye Pittman was up next in the 71kg category and competing at her second Games. Faye secured an 81kg snatch and hit 108kg Clean and Jerk. This gave Faye a total of 189kg, finishing in ninth place.

Day four saw Amy Salt make her debut at the Commonwealth Games in the 76kg category. Amy secured an 86kg snatch and opened her clean and jerk at 105kg, which unfortunately was overturned by the jury due to a press out in the Jerk. Amy then limped onto the platform for her third and final attempt at 107kg. With the crowd behind her, she dug deep and left everything out on the platform, but the Jerk was unfortunately deemed a press-out by the Technical Officials. Weightlifting Wales wishes Amy a speedy recovery and congratulates her on representing Wales at the Games.

Jordan Sakkas had a tense start to the competition, missing a 146kg Snatch twice. He came out to a roaring crowd for his last chance to stay in the competition, and with 146kg on the bar, Jordan recomposed, gave his all and made the lift. Jordan then secured a 182kg Clean and Jerk giving him a total of 328kg, placing him seventh at the Commonwealth Games.

Weightlifting Wales would like to congratulate all athletes on representing Wales at the Commonwealth Games 2022. The Games are a culmination of four years of hard work and every athlete fought hard to secure their place on the team. Each athlete should be proud of their achievements on the platform. Weightlifting Wales looks forward to building towards Victoria Commonwealth Games 2026. 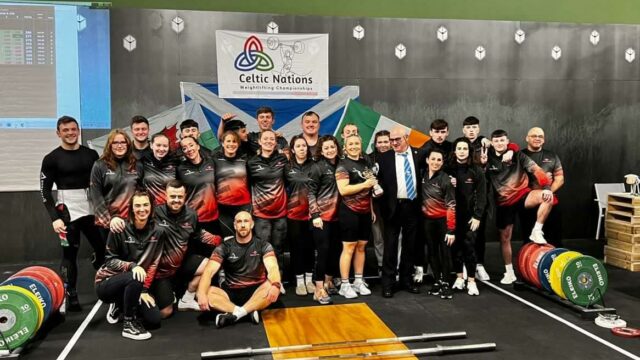 Silver for Wales at the Celtic Nations 2022